Notice: The page may contain affiliate links. Trendinbuzz is supported by its audience. When you purchase through links on our site, we may earn an affiliate commission.
Home Fashion Celebrity Kylie Jenner colours her hair exactly like her Kylie Skin products
Share
Facebook
Twitter
Pinterest
WhatsApp 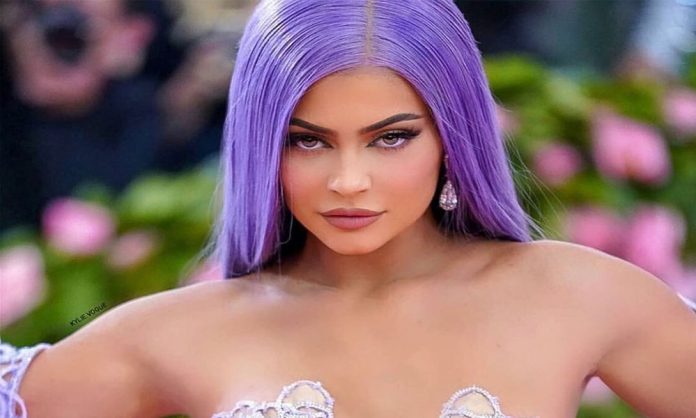 Kylie Jenner has up her branding game and is going strong with her promotion campaign this week. The past week has been undoubtedly a week for Kylie Skin and everyone is aware about that. The internet was going crazy about a video where Kylie Jenner launched her skincare line. Kylie posted a new video on her Instagram page that showed her washing her face for an entire 0.5 seconds. What is astonishing besides the length of this video is the presence of thick foundation secretly lying on her skin that is clearly visible in the clip.

But it is safe to say that this face-washing fiasco doesn’t really matter to Kylie. The Kardashian-Jenner forces are serious about their business and they can’t be stopped from chasing their bag of money. In the leading up events, she made another attempt at promoting her brand by posting a picture of hers. In the picture, she can be seen in cotton-candy pink coloured hair at a drug store. The interesting thing here is that the colour of her hair matches exactly with the packaging of the Kylie Skin products.

We have to admit that it is definitely slick on the part of Kylie to promote the pink packaging of her new collection that greatly appeals to the millennial. It appears to be a quick stop at the gas station where she carried her baby pink bag to match with the same. A packet of Doritos didn’t harm anyone though. The loyal Kylie fans loved her dramatic new hair colour appearance as she posted this picture of Instagram. Needless to say that the photo has become hugely popular as it has got over 6.4 million likes and above 40,000 comments at the moment.

The stint, unsurprisingly, went on for a short while as she went back to her usual shade of jet-black that she had been going around with, for the majority of the year. This was confirmed when she posted a cute picture with her daughter Stormi from Malibu. This was followed up shortly with another photo and this time it was a selfie flaunting her smooth long hair. Who could forget when Kylie used to wear a new wig every day to match each colour of the rainbow? Although she has had fun with few shades in her hair this year other than that it has been a quiet year for the hair colour aficionado.

It could be possible that Kylie has gone past those bright-coloured wigs now as much as we can see that the pink hair moment lasted for just a minute. It is safe to say that none of us know what’s she going to do next, so it better to just wait and watch.

Earlier last month, the new account for Kylie Skin on Instagram posted a photo that had the bottom of a bottle of a face wash that was surrounded by lather and said ‘first step’. At first, everyone thought that Kylie will be launching only a cleanser but people didn’t have to wait long as the entire range of offering was revealed later that evening. A short clip of visibly pink products was released with the caption telling about Kylie’s skincare essentials and new skincare routine. It had foaming face wash, walnut face scrub, vanilla milk toner, moisturizer for the face, an eye cream and vitamin c serum. It is called ‘the skin set’ implying that the products will be available to be bought as a bundle and coming posts confirmed this and the individual prices of all.

Kylie is undoubtedly a big influence on all social media platforms and her pink hair stunt has certainly grabbed the attention of million over the past few days. She has been successfully branding the products for other brands so it is obvious that she isn’t going to leave any stone unturned when it comes to her own range of skin care. Sit back and watch how the youngest billionaire of the world does more marketing stunts to promote Kylie Skin. It is just a matter of time that the product becomes a hit amongst the ardent fans of Kylie.